You are at:Home»Hunting»September in the South: The Month of the Outdoorsman

September is the month of the outdoorsman in Texas. Sometimes, barely a week will separate the start of dove season and the start of teal season. Catch it in the right year, like this year, and even archery season will start on the last Saturday of the month. But, with the dove and teal seasons falling so close to one another, how can we enjoy the benefits of one and still avoid missing out on the action of the other? I’ve seen plenty of years where the action in the dove fields is just as hot in the opening week as it is by the time the teal make their push south…and it’s difficult to walk away from something like that. Unfortunately, some sacrifices will have to be made to reap the benefits of both,  but it may not turn out to be as hard as you originally thought anyway.

Probably the greatest thing about teal hunting is its simplicity. Every year, I pick out a few of my most used and abused decoys and throw them into a pile. These are my early season decoys, worn down and faded, lacking the brilliant luster of late-season birds. And while you’re at it, bring your spinning wing dove decoy into your pile. Why dove? Because the spinning action on the dove decoy is much more similar to a teal’s wing beat than that of a mallard decoy. Forming a C shape with your decoys, place your spinning wing decoys in the middle to represent landing birds. Like I said, simple! And it’s perfectly legal (in Texas) to pass-shoot dove if they fly by. Because you’re engaged in waterfowl hunting as well, you must use non-toxic shot. So, leave the lead shot at home or in the vehicle. After the morning teal hunt, hit the fields or waterholes and concentrate on the doves. After all, you’ve already got your spinning wing decoys with you. If you don’t have a spinning wing decoy, take my advice and spend a little extra money on that battery-powered model and just bypass that wind-powered model altogether. 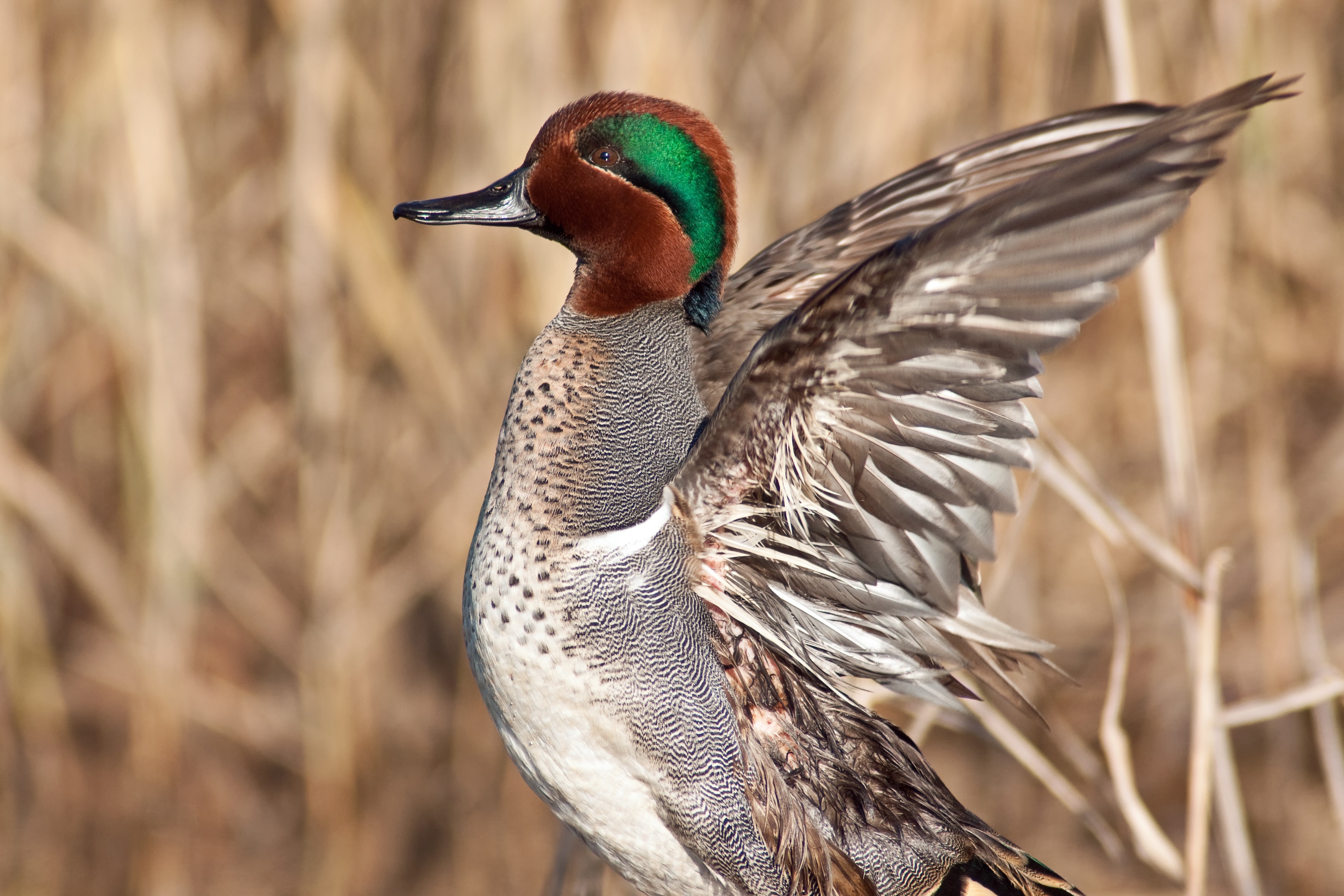 Being such small waterfowl, teal prefer shallow waters in the range of ankle to mid-calf deep and wide open landscapes that allow them to see danger coming from a long distance. Doves aren’t very different in this regard because they get their water from landscapes with little to no vegetation. If I find one using a particular area, it’s a good bet that I’m going to find the other using the same area. Areas of a landscape that come to a hard point in the water are great places to keep an eye on. If you’re hunting a cut field, unless it’s been flooded, it won’t be as productive for teal as it is for dove. If you’re lucky enough to hunt a field that has power lines cutting across it rather than surrounding it, take full advantage of it to focus on doves. Doves will usually perch on the lines, creating an easy shot opportunity once they fly down to feed. It can be difficult to locate an area to hide yourself if you’re in the middle of a field.  So use your spinning wing decoy to pull birds to a more suitable area that allows you to stay hidden until the opportune time.

It’s Hot (and Dangerous) Out There!

We have 4 species of the venomous snakes including rattlesnakes, copperheads, water moccasins and coral snakes. Oh, and did I mention alligators?

While it’s not the scorcher that August tends to be, September in Texas can still be hot. Be careful and don’t let yourself get overheated in the field. Speaking from experience, heat exhaustion and dehydration are not fun at all. It can come on in an instant, and its effects can be felt for several hours or days afterward. Having plenty of cold water available during your time in the field and a reserve amount at your vehicle for the end of your hunt is the best thing you can do for yourself. While hunting, use the shade of the area not just for concealment but also for keeping cool. Venomous snakes are still prevalent this time of the year too, so watch your step in low light conditions. Remember, in Texas, we have four species of the venomous snakes including rattlesnakes, copperheads, water moccasins and coral snakes. Oh, and did I mention alligators? It only takes one close encounter with a decent-sized gator to ruin a hunt. While they tend to keep their distance, stepping into the water puts you in their territory. Try to refrain from hunting alone, especially if you’re in an area known to harbor gators. If you’re hunting with a dog, keep an eye on them too, especially when sending them after a downed bird.  Gators don’t care what the prey is, they will strike at anything they think they can take down.

Above all else, it’s the experience of the hunt that you’ll carry with you after it’s all said and done. Well, that and the delicious meal! Don’t be afraid to switch things up because you think you’ll miss out on something. Watch weather changes in the states around you.  Look for those cold fronts that start becoming more prominent as we move later into the fall. The change in temperature necessary to get blue wing teal flying isn’t very much. While it may still be hot down south, that’s what they go for. If you’re not seeing them at the beginning of the season, pay close attention to what is happening in the northern states to help gauge when they might migrate. With a little bit of planning and some footwork on the ground, you can easily put a couple of limits worth of fowl in the freezer. This just in time to put the gun away and pick up the bow.

Born and raised in Texas, I grew up in a family of hunters and outdoorsmen. I harvested my first deer when I was 11 in the Pineywoods of east Texas with my grandfather and that quickly opened the door for me to dove, turkey, ducks, hogs, and most recently, exotics. I enjoy fishing, especially for crappie, just as much as I enjoy hunting. I believe it is our duty, as conservationist, to pass along the lessons and skills we acquire throughout of lifetime to the younger generations, so that they may enjoy in the future what we enjoy today. The glory days of hunting are not behind us, but rather in front of us. We have a responsibility to ensure that our way of life is not lost, but carried on for generations to come.